Opening this new section, Classic Manga, we will tell you the story of one of the most famous manga: Astroboy. With him, the manga became a worldwide success in sales of copies and merchandising.
If you haven’t seen this classic wonder, you should …

Astro Boy, known in Japan by its original name Mighty Atom (Japanese: 鉄腕アトム), is a Japanese manga series written and illustrated by Osamu Tezuka. It was serialized in Kobunsha’s Shōnen from 1952 to 1968. The story follows Astro Boy, an android young boy with human emotions who is created by Umataro Tenma after the death of his son Tobio. Eventually, Astro is sold to a robot circus run by Hamegg, but is saved from his servitude by Professor Ochanomizu. Astro becomes a surrogate son to Ochanomizu who creates a robotic family for Astro and helps him to live a normal life like an average human boy, while accompanying him on adventures.

Astro Boy has been adapted into three anime series produced respectively by the first incarnation of Mushi Production and its direct successor Tezuka Productions, with a fourth in development. The manga was originally produced for TV as Astro Boy, the first popular animated Japanese television series that embodied the aesthetic that later became familiar worldwide as anime. After enjoying success abroad, Astro Boy was remade in the 1980s as New Mighty Atom, known as Astroboy in other countries, and again in 2003. The success of the manga and anime series led it to becoming a major media franchise consisting of films including a major motion picture, a number of soundtracks and a library of Video Games. The series was also among the first to embrace mass merchandise including action figures, collectible figurines, food products, clothing, stamps and trading cards. By 2004, the franchise had generated $3 billion in merchandise sales.

Astro Boy is one of the most successful manga and anime franchises in the world and has become Tezuka’s most famous creation. The combined 23 tankōbon volumes have sold over 100 million copies worldwide, making it the tenth-best-selling manga series of all time. The 1963 anime series became a hit on television in Japan and the United States. Astro Boy has been praised for its importance in developing the anime and manga industry. It has been featured on numerous greatest anime of all time lists and has partially inspired other authors in the creation of influential manga.

What is the Astroboy´s history ?

Astro Boy is a science fiction series set in a futuristic world where robots co-exist with humans. Its focus is on the adventures of the titular “Astro Boy” (sometimes called simply “Astro”): a powerful android created by the head of the Ministry of Science, Doctor Tenma who created Astro to replace his son Tobio, who died in a self-driving car accident.

Dr. Tenma built and adopted Astro in Tobio’s memory and treated Astro as lovingly as if he was the real Tobio. However, Dr. Tenma soon realized that the little android could not fill the void of his lost son, especially given that Astro could not grow older or express human aesthetics (in one set of panels in the manga, Astro is shown preferring the mechanical shapes of cubes over the organic shapes of flowers). In the original 1960 edition, Tenma rejected Astro and sold him to a cruel circus owner, Hamegg (the Great Cacciatore in the ’60 English dub). In the 1980 edition, Hamegg kidnapped Astro while Tenma was trying to find him. In the 2009 film, Tenma rejected Astro part-time because he could not stop thinking about his original son, but later during the film, Tenma realized that Astro made credit to replace Tobio; as a result, Tenma decided that he would readopt Astro. None these events about Astro being rejected (completely or temporarily) or kidnapped in both the 1960 & 1980 cartoons as well as in the 2009 film happened in the 2003 cartoon as Astro’s birth was given by Professor Ochanomizu (Dr. Elefun in the 1960 & 1980 cartoons as well as in the 2009 film; Dr. O’Shay in the 2003 cartoon).

After some time, Professor Ochanomizu, the new head of the Ministry of Science (co-head of the Ministry of Science in the 2009 film), notices Astro Boy performing in the circus and convinces Hamegg to turn Astro over to him. (In a retcon the story becomes far more violent and complicated). He then takes Astro in as his own and treats him gently and warmly, becoming his legal guardian. He soon realizes that Astro has superior powers and skills, as well as the ability to experience human emotions.

Astro then is shown fighting crime, evil, and injustice using his seven powers: 100K horsepower strength, jet flight, high intensity lights in his eyes, adjustable hearing, instant language translation, a retractable machine gun in his hips, and a high IQ capable of determining if a person is good or evil. Most of his enemies are robot-hating humans, robots gone berserk, or alien invaders. Almost every story includes a battle involving Astro and other robots.

Jeff Yang of the San Francisco Chronicle, in discussing Schodt’s The Astro Boy Essays, said “while kids came for Astro’s atomic action – just about every installment included Astro harrowing a fellow robot who’d fallen from digital grace with his fission-powered fists – they stayed for the textured, surprisingly complex stories.”

The 1960s anime was named the 86th best animated series by IGN, calling it the first popular anime television series.

Today I received a special email: Our #HappyCustomer Carolina has take a picture of her Rukia ring on the Salón del Comic in Granada.A special place to share her love to # Bleach. 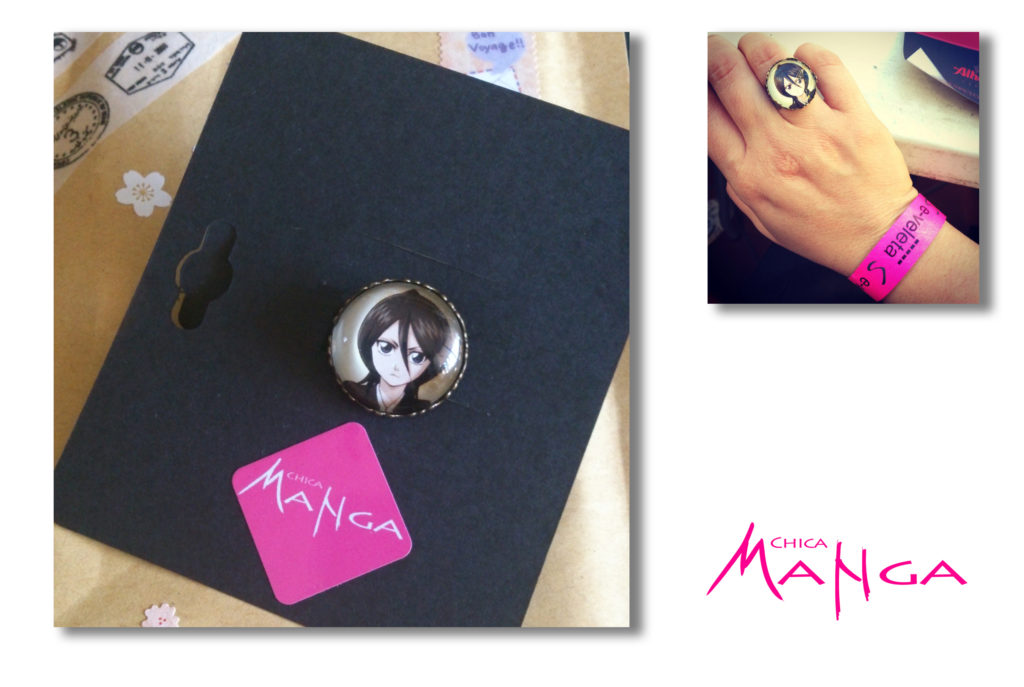