Fullmetal Alchemist: The Story Of Two Brothers is by far one of the most popular manga that won the 49th Shogakukan Manga Award for the shounen demographic in 2004. With over 64 million copies in print around the world along with having received two very successful anime adaptions, this is a manga series that redefined what a shounen manga series can be.

Fullmetal Alchemist was one of the few manga series of it’s time that focused more on a narrative than being the typical lighthearted action-comedy manga that shounen was known for. There isn’t just one thing that makes it such an incredible read but culmination of amazing storytelling, character development and action with a touch of romance.

Even after all these years finding a manga with a story like Fullmetal Alchemist is just not possible. The story right off the bat starts on a rather grim tone with both the protagonists losing all or parts of their body’s and seamlessly transitions into a more lighthearted tone before going full dark again.

Each chapter you read will keep you on the edge of your seats always anticipating what will come next only to be left speechless of how the plot paces itself. What truly sets the story apart is that even during the darkest moments of the series there’s always a bit of hope to push the protagonist on.

The action scenes in Fullmetal Alchemist might not be the best but they aren’t definitely bad by any account. Considering the manga is only 116 it doesn’t leave a lot of room for extended fight scenes but the ones we do get are choreographed extremely well and the art is top notch as well which just makes it even more enjoyable to read.

When it comes to comedy and drama, the series tends to lean towards the dramatic sides but manages to add in enough moments of over the top comedy to not let the drama go stale without overstaying its turn. 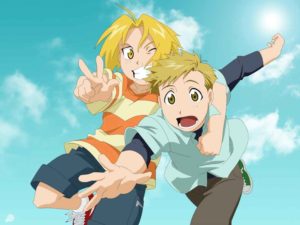 Even though there is a greater focus on the story but this is still an action-packed manga. Unlike most manga where you have to trade character development for more flashy action panels on the page, Fullmetal Alchemist manages to find the perfect balance and manages to flesh out each character to an amazing detail.

Every character in Fullmetal Alchemist is downright amazing. From their designs to their personality and even their backstory, this manga gets each character just right without even trying to justify their actions which makes them feel all the more realistic. The protagonists, Ed and Al, in particular, go through so much growth over the span of 100 chapters that by the end of it you feel that you have an emotional connection with them.

Should You Read It?

Fullmetal Alchemist is by far not a perfect manga and it has its fair share of problems which include the length of the series among many others. But, overall, Fullmetal Alchemist manages to be incredibly entertaining and thought-provoking while staying true to the tradition of Shounen manga. If you’re someone that enjoys a mind-blowing story with equally amazing characters then reading Fullmetal Alchemist is highly recommended.